Memorial Day – A Debt of Gratitude 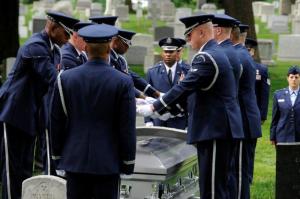 Memorial Day celebrates the men and women who gave their lives in service to the Armed Forces of the United States of America. The debt of gratitude that we owe each of those who have fallen and who have given the ultimate sacrifice is a debt that cannot be repaid. Since the start of the Revolutionary War in 1775 there have been over 1,354,664 Americans who have died in service to our country. Memorial Day gives us all the opportunity to honor those who have died while serving the country by remembrances.

In 2012 my uncle, Retired Air Force Major General Jesse M. Allen, died. He served in both the Army and Air Force. His military service began in 1942 when he enlisted after high school and was sent to Europe during World War II. He was buried at Arlington National Cemetery earlier this month and he had a rather storied combat career serving in World War II, the Korean War and in the Viet Nam War. During the Korean and Viet Nam Wars he flew over 237 combat missions. My uncle was known to say that “If you can dream it you can become it” as he entered the service as a private and rose to the rank of major general when he retired after 30 years of service.

This day of remembrance also gives us an opportunity to recognize and honor all who serve and have served the Armed Forces of the United States. We certainly owe a debt of gratitude to every American who chose to serve and Memorial Day is an appropriate time to do so. Although I did not serve, there have been a number of my family members who have honorably served over the years starting with Ethan Allen, the leader of the Green Mountain Boys in Vermont during the Revolutionary War. Both my father and brother served as combat pilots. I am very proud of their service. 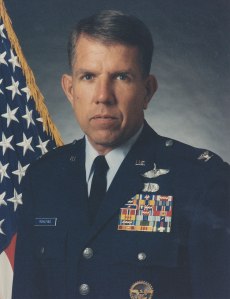 I did not have the honor to serve, but if you have served in the Armed Forces or have family or friends who have served I’m sure that you are proud of your own service or the service that others have given to our country. Today is a great day to remember and give thanks for that service.

I have had the great honor to have worked with many people in my career who honorably served their country and I would like to thank them again for their service. The lessons that those who serve learn about loyalty, leadership, honor, integrity, and personal ethics and these are assets that they are able to build upon and utilize throughout their lives. One does not have to serve in the Armed Forces to have learned these important attributes, but those who have served have a great sense of what these values mean both on a personal and professional level.

We should all be thankful on Memorial Day for individuals who choose to serve their country by joining the military to help protect us so that we can live in a safe and secure country. I know that on this day I am very proud of my family members who have served and those that serve today. I want to thank them for their sacrifices in service to our great nation.

I hope that you take the time to give thanks for their service and sacrifice as well.

“Attack this day with an enthusiasm unknown to mankind.” – Jack Harbaugh

“Attack this day with an enthusiasm unknown to mankind”, is what the father of two current National Football League (NFL) head coaches said to them when he dropped them off for school each morning as they were growing up. That father is Jack Harbaugh and he is the proud father of Jim Harbaugh – head coach of the San Francisco 49ers and John Harbaugh – head coach of the Baltimore Ravens. Based on the careers of both Jim and John it is apparent that their father’s entreat to them each school day provided them with the drive to be successful.

In these difficult times that many in business face, Jack Harbaugh’s advice to his sons should resonate with everyone. Enthusiasm (or passion) for what it is you’ve chosen to do in life is critical, especially if you want to be successful. It may be difficult to maintain your enthusiasm when you look around at the competitive landscape; and if you’re going to survive and grow your company not only do you have to be enthusiastic, but everyone in your company needs to exhibit the same trait. Every organization, regardless of the size, needs a leader or leaders that can help guide it through the ups and downs that surely will take place over the life of a business and help instill the enthusiasm that Jack Harbaugh instilled in his sons. Without enthusiasm, you’re doomed.

“There are three ways to beat somebody. Out work ‘em. Out think ‘em. Then you intimidate them. Its part of the game.” Ben Hogan, professional golfer

In his era Ben Hogan was one of the great golfers and as a child and as an adult suffered adversity which he was able to overcome. At an early age he suffered the loss of his father due to suicide and to help his family earn money he took a job as a caddie. His golf career was put on hold for three years while he served during World War II and a few years after he returned to professional golf; he and his wife were involved in a near-fatal car accident in 1949 where he sustained multiple fractures to his pelvis, collar bone, ribs and an ankle. His doctors told him that he may never walk again and that his professional golfing career was over. Not only did he walk again, but he went on to win on the professional tour and win big. Ben won 63 professional golf tournaments during his career. I think he mastered the three ways to win.

At any level in team sports coaches try to put together a group of individuals that can work together cohesively toward the ultimate goal of winning. In business, leaders and managers work toward the same goal. In business putting together a diverse group of individuals who can accomplish the various goals that the company sets is what drives success. As Ben Hogan said, to be successful at what you do you need to work hard and come up with strategies that will enable you (and your team) to win. The third way Ben used to win was to intimidate his opponents through pressure. Pressure is a factor that exists in all sports.

What I like about Ben Hogan’s quote is that you can relate it to the business world. To me it embodies the idea that even if you’re business is smaller than those with whom you compete; you can still be successful by being good at your work and by “Being Smart”. Success can be seen by fellow competitors in the marketplace as a form of intimidation or more importantly respect. Regardless of the size of your business, most often when you “out work ‘em and out think ‘em” you’ll find success. Use all three ways to your advantage as Ben Hogan said, “Its part of the game.”

“Insanity: doing the same thing over and over again and expecting different results.” Albert Einstein

This quote, attributed to Albert Einstein, often is used to describe a business practice/strategy or two that a company never seems to change even though the business environment that the company operates is constantly changing or evolving. Over the years I’ve used the quote a number of times while trying to make a point in a business discussion with a supplier, T.P.A., employee and others. I’ve also used it while talking to one or more of my family members or friends. Perhaps you have too.

Often, when you’re just too close to something that you just can’t see the problem, you need someone close to you that you can trust who can tell you what they see that you’re doing in your business that’s not working. Something you’ve been doing “over and over again” while getting the same result? I’m going to guess that there are many. We tend to take a “if it ain’t broke don’t fix it” approach to things we’ve done over the years that have historically worked. Einstein’s quote is very simple and straightforward. Are there things in your business that you could perhaps take another look and do a little differently to improve the performance of your business? If you make a change you may get the same result, but if you’re not willing to try; how will you ever know?