I was reading an article that appeared in Tuesday’s USAToday with the headline – “Amazon puts 15,000 robots to work on Cyber Monday”. 15,000?!?! The Kiva Systems robots do tasks that historically have been done by some number of Amazons 88,400 employees. Robots picking products that are purchased online by consumers that then need to be shipped to them from Amazon fulfillment centers across the globe cost some number of people jobs. Using Kiva robots obviously provides great value to Amazon shareholders since they don’t require a human resource department to oversee payroll, other benefits such as medical and dental plans, vacation days, sick days, etc.. But this can’t be good for union and hourly workers. 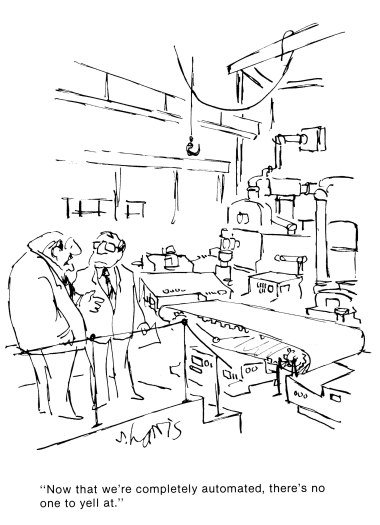 Robots are obviously taking over or facilitating any number of manual jobs that historically have been done by employees. Amazon’s use of robots brings the product(s) ordered online and stored in shelf bins to a packer for shipping. Once the purchased item is delivered to the packer the robot returns the shelf bin back to where it belongs awaiting the next task. These robots have certainly saved Amazon the cost of workers who provided this service. The article says that Amazon spent $ 775 million for the Kiva robots and that, “The robots are part of a complex software and hardware system that simplifies picking and packing at warehouses that contain literally millions of items.” The article doesn’t mention that each robot, and the systems that supports them, cost an average of $ 51,667. Payscale.com estimates that the average Amazon employee salary cost is in a range of $ 50,098 – $ 122,195. After Amazon’s initial investment in the Kiva robots there would be ongoing costs for maintenance, repairs, replacements and of course those whose job it is to manage the 15,000 robots, but Amazon obviously did all the internal analysis and studies to see that the return on investment was well worth the $ 775 million.

The advent of using robots isn’t new, but with robots taking over responsibilities of human pickers at Amazon and the use of robots across countless industries and companies the potential loss of unskilled or low skill jobs could be devastating. Taking place at the same time is the strong push by some city and state governments to increase the minimum wage through legislation. Somehow there seems to be a potential disconnect.

Automated tasks keep people—who can get bored or irritated by doing repetitive tasks—free from drudgery. It also liberates them to do more strategic and valuable activities for the company. Automation lies at the core of all of our modern conveniences. Machines are made to do repetitive, boring tasks—without complaining.”

You can see where the use of robots and/or automation that is rapidly taking over or helping employees in their jobs providing cost reductions and greater shareholder value for companies who utilize them, but I’m guessing that most employees would prefer being “bored or irritated” and not “free from drudgery” versus not having a job. Certainly there are countless jobs that won’t be taken over by robots, but is your job completely safe from being replaced by a robot so that you can be freed to do something else? I’m guessing the Amazon employees that were picking products for packing at one time thought so.

If you’re a business owner or in management with responsibility for delivering shareholder value you have to continually be looking for ways to cut costs and increase value just as Amazon has done. There are countless jobs that aren’t going to be replaced by robots, but are there robots that can help you improve the productivity of your employees making their jobs easier and provide greater shareholder value? As companies compete against each other for business at a local, regional, national or international basis; looking for the slightest advantage against industry competitors the answer has to be yes. What are you doing to take any advantage available and ensure that you continue to grow and prosper in your industry?

Just Sayin’ Blog – The Times They Are (Always) A-Changin’

The ability to accept and adapt to change is a critical component to finding success in business. As much as we find comfort in the places we know best, we must continually push ourselves and our company toward a place that no one else has found yet or will never figure out.

How do you set the bar higher than your competitors so that you can outperform them? That’s a question that you need to answer for your market and business.

In 1964 the singer songwriter Bobby Dylan released a song “The Times They Are A-Changin’” which portrayed a time of great change in the United States. Every new generation looks back at the preceding generation as one being unwilling or unable to change and stuck in the past unable to move forward. The 60’s were a time of great change in social norms, fashion and music, as well as in the political landscape. We’ve been experiencing a great deal of change in retailing for quite some time, but especially so in this new Millennium and it doesn’t seem to be abating.

Right now there is a ferocious retail battle royal in the retail consumer market with two of the largest retailers, Walmart and Amazon.com (big box versus internet retailer), fighting to determine how consumers will buy countless products in the years to come. In 2009 Amazon.com began rolling out a program offering same day shipping in a number of cities. It has since developed a large network of warehouse distribution centers to service its customers across a large part of the United States. To counter Amazon.com, Walmart started a Walmart To Go offering online shopping of a select number of products shipped directly from their store locations to customers. And in a few markets Walmart is offering same day delivery of products. The strategy that Walmart is attempting is difficult and a potentially dangerous one as it already has 4,000 big box stores (including Sam’s Club) which have a very high cost to operate. The margins that Walmart operates under are also very small, so the gambit is one that is sacrificing current profits to maintain and hopefully gain market share against Amazon.com and other retailers unable to compete. When your sales are $ 444 billion a year versus Amazon.com’s $ 48 billion it would seem that you’d have an edge, but last year Amazon.com saw a 41% increase in sales versus Walmart’s 6% overall increase in sales.

Which company is following a strategy that will allow it to be the most successful retailer in the future? Time will tell, but even when you’re Walmart you’ve got to consider that your strategy for taking market share from the mom & pop businesses, which has proven to be such a successful model for years, could ultimately be at risk from other companies with strategies that don’t require big box brick-and- mortar stores. Each is trying to find a unique selling proposition (USP) that will attract consumers to ensure long-term success and neither will stop until it is found.

Who remembers A & P (The Great Atlantic & Pacific Tea Company)?A company that once was considered the Walmart of its time,  A&P held the title of the world’s biggest retailer in the 1930’s when  it had 16,000 stores in the United States. In the late 1930’s A & P began the self-serve grocery store concept, but by the 1950’s it failed to recognize the changing marketplace and failed to listen to the demands of the ever-changing consumers. It eventually became an irrelevant retailer. By not adapting to the changes that were taking place in the marketplace, A & P began a decline in sales that ultimately caused it to file for bankruptcy. The company did emerge from bankruptcy, but A & P probably never again will capture the greatness it had once achieved.

There are many ways for your business to remain relevant and continue to survive in the retail world. Whatever you believe it is that you must do to remain relevant you need to make sure that your customers believe it too. For some businesses remaining relevant may mean selling or merging with a competitor. In recent weeks several businesses have announce that they are doing just that. You’ve probably read about recent acquisitions announced or completed by Gerber Collision & Glass (in Florida), ABRA Auto Body & Glass (in Minnesota), Guardian Auto Glass LLC (in Maryland) and Safelite Auto Glass (in Wisconsin and South Carolina). Of course buying and selling companies in the auto glass repair and replacement (AGRR) industry isn’t new, it’s been going off and on in spurts since the mid 1980s. During the past 30 years, a number of companies have acquired others in the AGRR industry to increase their own market share and separate themselves from or take out competitors. It certainly seems that there has been an uptick in acquisitions of companies of all sizes and I’m sure you’ll be hearing of others very soon.

Other ways you can remain relevant are by finding that USP that separates you from your competitors. So what is that something that only you can do in your market, something that raises the bar so high that your competitors either can’t or won’t try to achieve it therefore distinguishing you from others in the eyes of consumers? If you find that USP, you will survive against other retailers in the battle royal that exists in your market. Of course the need to find that extra something has always existed in business, but maybe more so today with the pace of change that you see across the retail industry. When you see the mega-retailers like Amazon.com and Walmart fighting over current customers to determine which will find the USP that will secure future customers and separate it from others, you know that the same battles that have been going on for years aren’t subsiding anytime soon. It is the same in the AGRR industry and you can be sure that things that you’re doing today in your business will change tomorrow and you need to change with it.

So when Bobby Dylan wrote in the last stanza of his hit tune in 1964,

I think that he could have added another word to the last lyric, “For the times they are always a-changin”.