As 2013 comes to a close I thought I’d take a quick look back at a blog I wrote in September titled “Wind at Our Backs?” I suggested that “it appears that we may have some wind at our back.” The wind was related to the three key drivers of the automotive glass repair and replacement (AGRR) industry: weather, the economy and miles driven.

The Weather – I wrote that The Old Farmer’s Almanac has a pretty good record at forecasting winter weather. For the 2013 – 2014 winter season, the magazine forecasted that we would be experiencing colder weather and snowfall in many sections of the country. When you take a look at the past month the forecast seems to be a good one. I live in Chicago we’ve seen January and February cold in December already. And we’ve had snow too. If you believe that cold, ice and snow are good for the AGRR industry and you live in markets that experience them, the start of winter in many areas has been good. The map below shows the snow cover in the United States as of today. 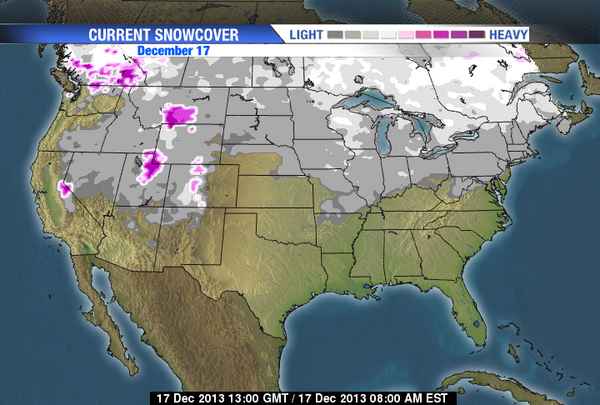 The Economy – Economic news continues to be positive with the United States Department of Labor – Employment Situation Summary reported that unemployment rate declined in November to 7.0% from October’s 7.3%. The major U.S. Indexes have soared to new highs the past month, but as someone I know always says “so far things are going well today, but it’s early”.

The Los Angeles Times reported in an article this week titled “U.S. economic recovery is expected to gain strength in 2014” stated, “The nation’s economic outlook has vastly improved in recent weeks with signs of stronger job growth, bigger gains in personal incomes and an improving housing market.” The article pointed out that the economic outlook for the country has improved sharply and that consumer buying is influencing businesses to hire which means that confidence in the both the long and short-term economy.

The positive economic outlook is reported at a national level but what really matters is how are things going in the market or markets you compete. I hope things are going well in the markets in which you compete.

Miles driven – On a trailing twelve months ending September 2013 the U.S. Department of Transportation–Federal Highway Administration (FHA) reports that travel overall was up 1.5% or 3.7 billion vehicle miles versus September 2012. For all of 2013 versus 2012 miles driven is up 0.4%. The only area of the country not reporting an increase year-on-year was the West with a 0.2% drop. The South-Atlantic and the South-Gulf regions both reported a 2.4% increase, along with a 2.0% increase in the North-Central and the North-East a 1.0% increase. Overall miles have increased 9.8 billion miles driven so far in 2013. The September 2013 Travel Monitoring and Traffic Volume report was good news for the AGRR industry.

An improving economy is helping to fuel this increase in miles driven, but so is the drop in the cost of oil. The graph below shows the rise and fall of gasoline prices during 2013 and as you can see prices are trending lower.

Lower gasoline prices are obviously positive for your business and its helping to increase miles driven by consumers. Let’s hope that 2014 continues this trend.

As reported in an article titled “U.S. roads, bridges are decaying despite stimulus influx” that appeared in the USA Today earlier this year, “Indeed, just 38% of the pavement on roads stretching miles across the USA is in “good” condition…” Bad roads are good for the AGRR industry and as the article points out, “The cumulative cost of these tattered roads isn’t just about dollars and cents. Though poor pavement conditions do cost consumers billions annually in vehicle repair…” With government budgets tight both at a national and state level we’re probably not going to be seeing much money spent on fixing roads and the money that is spent will probably be short-term.

The three key drivers appear positive at the moment. You can probably argue that there are other key drivers in your business today such as the competitors you face in a market. As I’ve mentioned before I believe that you are the key driver in your business. You and the people you surround yourself. Taking advantage of opportunities in the marketplace the best you can as they come up will make the difference in how 2014 starts for you in your business. In talking with a number of people I know in the industry 2013 and the past few years have been tough.

With the three key drivers turning positive as we close 2013 and if you agree that the wind is at your back, what are you going to do in the next year to make your business stand out and drive success?

I hope that you have a Happy Holiday and that the New Year will most definitely be a very good year.

As we near the end of the first three quarters of 2013, it appears that we may have some wind at our back. There has been some slight improvement in a couple of the key drivers of the automotive glass repair and replacement (AGRR) industry. The key drivers of the AGRR industry are weather, the economy and miles driven.

All-in-all a mixed bag with the weather and I hope that wherever your business is located you’re benefited by a colder and snowier winter.

The economy is also a bit of a mixed bag. Positive news came from new car sales which can be an important factor in an improving AGRR industry. J.D. Powers detailed year-on-year improvement in new-vehicle sales in the United States by reporting in their August 2013: Monthly Automotive Sales Forecast that “August new-vehicle sales reached the highest level in seven years.” The report went on to state, “New-vehicle retail sales in August 2013 are projected to come in at 1,270,400 units, 12 percent increase from 2012”. That’s great news for the AGRR industry. J.D. Powers is predicting growing new-vehicle sales for the remainder of 2013 and well into 2014. Really great news for the AGRR industry!

CNNMoney reported this past week in an article titled, “Jobless claims fall to 7-year low, but…” the rate of unemployment showed signs of dropping which is great news, but is tempered with the suggestion that it’s a result of people continuing to drop out of the work force. There are “11.3 million Americans who remain unemployed” the article reported with “three unemployed people for every job opening”. As with the weather, unemployment figures vary by region so its how your local economy is doing is what could affect how good your business will be in the next year.

The price of oil and how oil prices effect gasoline prices is another key part of the equation for the AGRR industry. As reported by the United States Energy Information Administration in the “Gasoline and Diesel Fuel Update”, prices year-on-year through September 9, 2013 on regular gasoline show that prices are down $ 0.26. Lower gasoline prices are great for both the consumers we rely on for business and for all of those company vehicles providing mobile service. Hopefully the price of gasoline will stay low.

You can look at reports from the U.S. Department of Transportation – Federal Highway Administration (FHA) as positive or negative depending where you reside. The FHA showed in its June 2013 Travel Monitoring and Traffic Volume Report that year-on-year miles driven were relatively unchanged with a slight decline of 0.1% from June 2012. The news that miles driven is not showing growth wasn’t great news for the AGRR industry that thrives on vehicles out driving on roads, but staying level was better news than a drop.

I’ve written in previous blogs “The Times They Are (Always) A-Changing” and “The Times They Are (Always) A-Changing – Part II” about the opportunities in the marketplace for AGRR companies. I strongly believe that there are opportunities for independents in our industry, but you’ve got to surround yourself with the best people and make sure that they are all committed to the goals and aspirations that you have for your business. If you haven’t got that you’re going to be struggling.

What else are you doing to separate yourself from your competitors? Look for ways to be successful and be relevant in your market so that you stand out. There is a recipe for success in your market and you’ve got to figure out what it’s going to take to make sure you find and keep being successful. It starts with you as you’re the key driver of your business.

If the three key drivers are beginning to turn to your favor and with the possibility of the wind at our backs, what is it you’re going to do in the next year to see that you not only survive, but thrive in the AGRR industry? It’s really up to you.