In these cold days of winter my sports focus starts shifting away from the NFL, even though the ultimate game is taking place this coming Sunday night. The so called “HarBowl” pits the San Francisco 49ers coached by Jim Harbaugh versus the Baltimore Ravens coached by John Harbaugh. I wrote a blog last year titled “Meaningful Quotes – Harbaugh, Hogan and Einstein”. In that blog I used a quote from their father Jack Harbaugh

“Attack this day with an enthusiasm unknown to mankind.”

While watching this NFL season we’ve witnessed how both of these coaches have guided their teams this season and on to win their divisional playoffs games. The two teams and coaches will meet in New Orleans on February 3, 2013 at Super Bowl XLVII. The Harbaugh brothers’ enthusiasm for the game and life is quite evident.

How about you? Do you have a similar level of commitment and enthusiasm for what drives you in your life?  Are you committed to doing the best that you can each and every day? Be that in business or in sport, there are times when you face difficult challenges that require you to make that extra effort that separates your company from another, one sports team from another.

The ability of you and your company to excel in business today demands that you have that enthusiasm and that you must surround yourself with those who you know have it too. Enthusiasm and the ability to give it your all, to use every play in the book and design your own new plays to beat your competition are keys to your success. This doesn’t mean that you’re always going to win just because you gave it your all,but you have to put yourself in the position to win. That’s certainly what I’m attempting to do and I want to associate myself with team members with similar enthusiasm who will help us to win.

As I mentioned earlier, this is the time of year that my sport focus moves away from the NFL and moves to NCAA Men’s Basketball. It ends quickly with March Madness, but right now, as a fan, I enjoy watching big games between NCAA powerhouse names. Whether you’re a fan of the Big 10, 8 or 12; the ACC; the SEC; the Big East; the Pac 12 or other conferences, you know what those big games are. In any game a top team can be defeated by another team not as highly ranked and seemingly with less talent. How? With enthusiasm and the desire to win underdogs can prevail. Upsets happen and, as long as your team is not the loser, it’s always fun to watch. In recent games you could see:

over the then 8th Gonzaga Bulldogs (now 7th)

Just to name a few.

The Gonzaga versus Butler game on Saturday, January 19, 2013 played at Hinkle Fieldhouse in Indianapolis was especially exciting and turned into an instant classic. After a hard fought game, Butler won the game on a last second shot by sophomore forward Roosevelt Jones. After the game Butler Bulldogs men’s head basketball coach Brad Stevens in an interview with ESPN suggested that,

“The pain of losing isn’t as great as the pain of regret.

You have to give it your best.”

The message is do everything you can to win your game even if you sometimes come up short. Don’t let anyone or any company determine the path you take and then find that you regret it later.

Win or lose in business or sport you must have what Jack Harbaugh exhorted his sons to always do and give it your all.

“Attack this day with an enthusiasm unknown to mankind.”

Great advice. And as Jack Harbaugh has also told his family for a longtime,

“Who’s got it better than us? Nobody!”

With his sons battling each other as head coaches in Super Bowl XLVII it appears a fitting motto for his family. 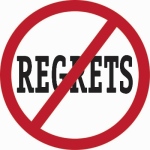