Clayton Christensen developed his disruption innovation theory studying the computer industry. Disruption in virtually any industry will determine winners and losers in business. If you visit the Christensen Institute web site you’ll read that:

“The theory explains the phenomenon by which an innovation transforms an existing market or sector by introducing simplicity, convenience, accessibility, and affordability where complication and high cost are the status quo. Initially, a disruptive innovation is formed in a niche market that may appear unattractive or inconsequential to industry incumbents, but eventually the new product or idea completely redefines the industry.”[1] 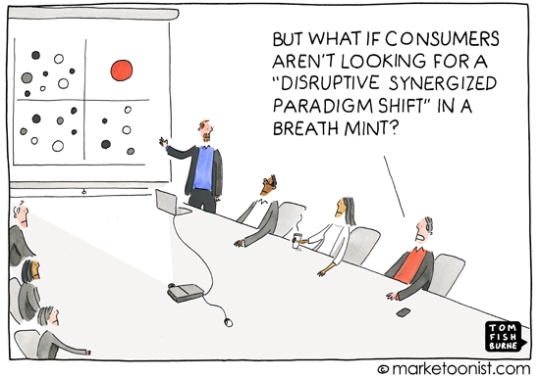 At the annual Code Conference held at the Terranea Resort, located in Rancho Palos Verdes, California that brings together some of the world’s geekiest folks; Google’s Sergey Brin debuted Google’s driver-less car (link). These cars were designed without a dashboard, steering wheel or a brake pedal. Why? A driverless car doesn’t need any of those accessories in the cars of the future as seen by the visionaries at Google. Could this be an example of “disruptive innovation” that could affect multiple industries?

This Google designed driver-less vehicle is very different from the self-driving vehicles that Google equipped with the driver-less technology installed on the Toyota or Lexus models that Google first began using. The initial self-driving cars Google used were off –the-lot models made by original equipment manufacturers so each came equipped with a dashboard with all of the typical accessories you’d expect to find both on and under the dash. But this new Google car comes without many of the accessories deemed required, up until now, and Google added a few other things that you will find disruptive long-term. It evidently is equipped with a flexible plastic windshield.

The car can only top out at 25 miles per hour and you’re not going to be seeing it on the highways anytime soon, but nonetheless with Google behind it one can only assume that the company’s long-term goal is to dramatically change driving habits. Will this technology be successful in disrupting the car industry? It would take time and a lot of treasure, both human and monetary. Google certainly has the wherewithal to attract the best and brightest to make this project a reality and money isn’t an issue.

Experts believe a self-driving car will make driving safer. Imagine that you can text or talk on your phone to your heart’s content as you won’t need to be concerned about distractions. Human driving errors should be greatly reduced if all the other cars around you are interconnected resulting in greater safety. Older drivers would have more freedom which would be good for them and great for everyone else concerned about grandma and granddad getting behind the wheel. Disabled drivers would also gain new freedom to rely on themselves versus others. An EY Automotive study says that autos with Autonomous Vehicle Technology will surge from 4% in 2025 to 75% by 2035.

There are going to be winners and losers as self-driving cars gain traction in the coming years. What will greater safety and independence for everyone mean to the insurance industry and all of those in claims departments today if the number of accidents drops? To the collision and automotive parts repair industry? To the rental car industry? To the auto glass repair and replacement (AGRR) industry? To the trucking industry? Countless industries will be affected. There’s going to be a lot of businesses that will rise and fall with this disruptive innovation and a lot of people at risk of losing their current job in an industry affected by the self-driving car.

There will probably be a day when those who want to drive their own cars could be viewed similarly as today’s drunk driver or someone that is texting as they are putting self-driving car riders at risk.

What will the likely outcome be if Google’s self-driving cars become a “disruptive innovation” and disrupt car manufacturers, the transportation industry as a whole and change the habits of the driving public in the years to come? We’ll have to wait to see.

So is there something a company or companies are doing today (or will be doing) in the AGRR industry that is (or will) disrupt the way things operate? Are there innovations that will “completely redefine(s) the AGRR industry”? I think the answer is yes to both questions. There are plenty attempting to disrupt what it is you are doing today and I know that there are those trying to disrupt the future of the industry with new innovations.

Here is another definition of disruption innovation:

“A disruptive innovation[2] is an innovation that helps create a new market and value network, and eventually disrupts an existing market and value network (over a few years or decades), displacing an earlier technology. The term is used in business and technology literature to describe innovations that improve a product or service in ways that the market does not expect, typically first by designing for a different set of consumers in a new market and later by lowering prices in the existing market.”

You probably think we already have enough disrupters in the AGRR industry, but what is your plan going to be if you’re not one of the one’s who has designed or is designing a “disruption innovation” in the industry? Something is certainly coming.